Home » Uncategorized » The Physics of it: Christiano Ronaldo’s Awesome Kick

The Physics of it: Christiano Ronaldo’s Awesome Kick 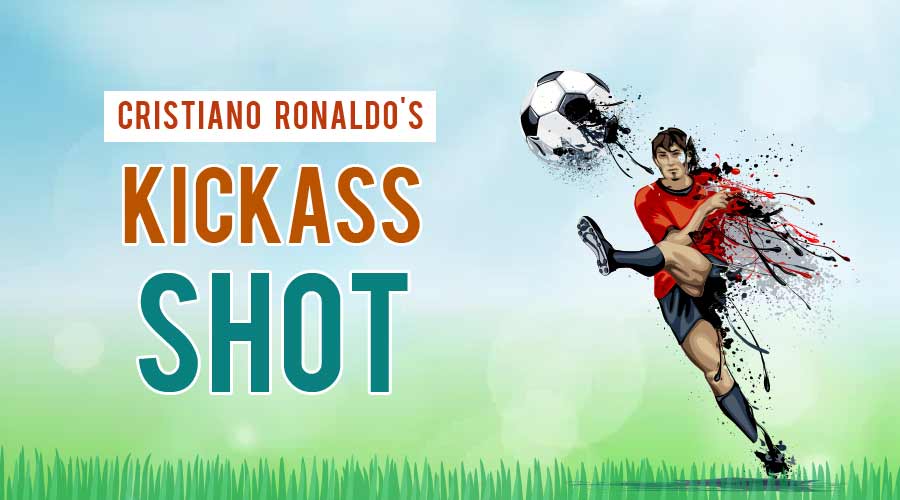 But, apart from the suave and swift moves that the Portugal Captain is known for, have you paid attention to the physics of his epic shot(s)?

With FIFA World Cup 2018 taking over our screens, the football fever is catching on! Also known as soccer, this exhilarating sport is loved by over 4 billion people in 200+ countries across the globe & has a television audience of over 2.3 billion. With swift and fast paced moves, playing football is no less than an intense workout. All the running around looks super simple on our TV screens, but let’s dig a little deeper.

The second law of motion states that ‘the change in velocity (acceleration) with which an object moves is directly proportional to the magnitude of the force applied and inversely proportional to the mass of the object’. The acceleration of the ball is determined by the force applied divided by the mass of the object that is being moved. This translates to how much does the player want the ball to move. If the ball is light (i.e. it has little mass), it will require more force to accelerate; if the ball has more mass, it will require less force.

The third law of motion states that ‘for every action, there is an equal and opposite reaction’. Yes, that happens when we kick the football too. We just don’t realise it, because our leg doesn’t seem to move. The leg has more mass, thereby it has more inertia.

Momentum is the velocity of object times its mass. When a football player kicks the ball, he transfers his momentum to the ball. Therefore, when the players pass the ball to each other, they use their feet to decrease the momentum of the ball. This allows them to have better control over the ball.

One of the most spectacular things in football is watching a player curving the ball into the back of the goal. How do they do this? Simple – it’s physics. A football is nothing but a projectile with initial velocity. The ball curves because the football player kicks the ball at a certain angle and velocity. Once in the air, it is the air curving the ball. The magnus effect is the reason the ball curves through the air. This makes the ball with enough speed and curve to trick and beat the goal keeper.

When the football is kicked, it becomes a projectile and follows a parabolic path through the air. With free kicks, football players kick the football across the field and over defenders.

When a football player kicks the ball, it keeps moving forward because of momentum. Friction against the ground and gravity cause resistance, slowing down the ball. Although, this can be undesirable because this prevents the ball from going into the goal. But on the positive side, this provides for a better control over the ball. Gravity is another force that acts on the ball, pulling it towards the ground.

Who knew physics could be so much fun! But hey, the next time you’re watching a FIFA match on TV, pay attention to your favorite football player showcasing his moves on the field/scoring that winning goal.

6 Tips to Increase Productivity While Studying From Home